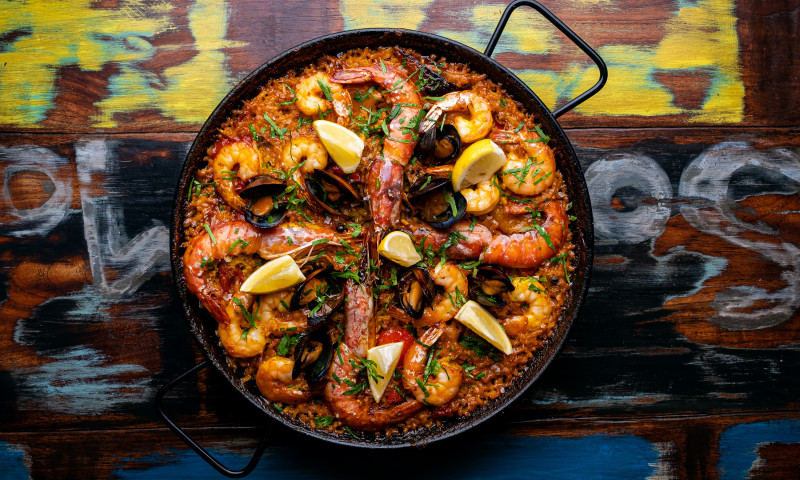 Do you know what paella is?

Spanish culture, not to mention its cuisine, is very diverse. Each region has its own typical dishes.

Spanish culture, not to mention its cuisine, is very diverse. Each region has its own typical dishes. You will find the best pinchos in the north of Spain, in the Basque Country, the traditional Butifarra sausage in Catalonia, and the national dish, paella comes from the Valencia region. It is one of the most popular Mediterranean dishes and, as with other Spanish dishes, paella relies on the freshness and variety of the ingredients.

To make paella, you only need a single pan, and no special utensils. The dish may remind some of you of Italian risotto, but it differs in terms of the preparation and the ingredients used. The recipe is supposed to have come from farmers in the area around Valencia. They worked in the fields and needed to save time. So they prepared lunches for all of them together in a large shallow pan over an open fire. Rice was cheap and there was plenty of it, seasonal vegetables too. If they fancied a bit of meat, they were able to find snails or catch a hare in the area around them.

Over time, other ingredients, such as seafood and pieces of chicken, were added to the dish on grander occasions. Family celebrations or gatherings at which making some great food for lots of people in one pan was the ideal thing to do.

Do you know what tapas are?

Live music, to enhance the experience even...

Websites use cookies to provide services, customize ads, and analyze traffic. Use the following option to enable all cookies or just use the ones you need to use the site.